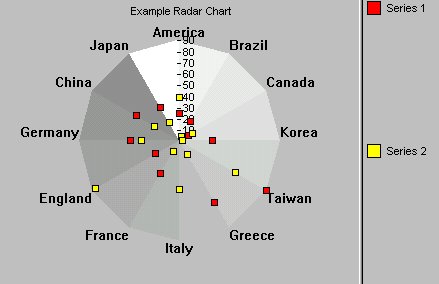 Radar charts are useful when you want to look at several different factors all related to one item. Radar charts have multiple axes along which data can be plotted. For example, you could use a radar chart to compile data about a wide receiver on a professional football team. On one axis, you could plot the percentage of passes caught. Another axis would show his yards per completion; another, his completions per 100 plays; another, blocks made; and a final axis might show his interceptions.

If a team did this for all their wide receivers, they could easily spot the best player as well as each player's strengths and weaknesses.

In a radar chart, a point close to the center on any axis indicates a low value. A point near the edge is a high value. In the football example, we would high marks near the outside due to the nature of what was being measured. In other scenarios, you might want points near the center, or low values. When you're interpreting a radar chart, check each axis as well as the overall shape to see how well it fits your goals.

For the radar chart, the following statistics are calculated: